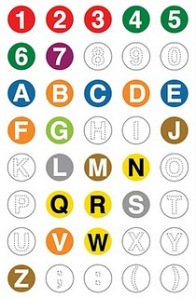 The New York Subway System is the most beautiful system of transit ever conceived. It criscrosses, bumps, hiccups, jumps, stalts, heaves, groans, hisses, weaves, narrows, slows, stops, indefatigably sighs and pumps through day and night, some lines coming more infrequently than others, a surge of borough to borough transportation. I look at it and think how can it grow? The G train is a favorite rags to riches story of mine. My only experience prior to taking it when it began running properly – about every 5 minutes  – was between the hours of 12 and 3 a.m. to get to a certain warehouse party in the middle of sketch central. Now it is shiny and sleek and powers through tunnels and across el tracks to serve lower Brooklyn and follow the F. It’s only natural that they should go together, seeing their placement in the alphabet. United at last. The Success of the L Train is prized by Williamsburgers and championed by Bushwickers. The 6 train is frequently overcrowded and you have to wait for the next one. The T will be built eventually. But the improvement of lines in existence is especially important. Overall quality with hope for the future. The 21st Century American Dream, in contrast with the symbolism of the Manhattan skyline, last century’s homage to capitalism. Not that there’s anything wrong with that, in the same way there’s nothing wrong with the image of the Coliseum.
Does that sentence make me a socialist?