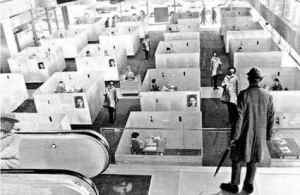 Parables are almost intrinsic to the classic literature of Russia and Eastern Europe. Like The Grand Inquisitor in The Brothers Karamozov, the gatekeeper at the end of Kafka’s The Trial, also known as “Before the Law,” is rich in symbolism. The parable is an example of the mise en abyme, in which a parable is related in a larger parable, the novel The Trial itself. The polysemous nature of this story is Biblical, and is likely why it has enjoyed such acclaim over the past decades.

Perhaps because the Russians and Eastern Europeans had less political freedom and social mobility, their literature reflects that. So it makes sense that the bleak nature of the Kafka parable is frequently called existential. It also helps to explain why Americans don’t use parables in post postmodernism.

We believe we are the forgers of our own destiny. So instead of interpreting a story differently, hell, we’ll just rewrite it. Which is why we write such good coming of age stories, bildungsromans – because they’re filled with adventure, the unexpected, and coming to terms with who you are as a person and a member of society. So if you want to write good parables or existential crisis novels, head east for some classic literature.