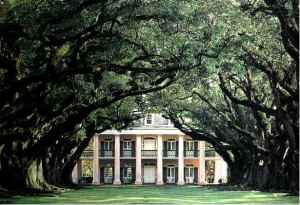 As I tweeted today at Oak Alley Plantation, the area along the Mississippi between New Orleans and Baton Rouge was once known as Millionaire’s Row and had the most money in the entire country. Just imagine the steamboats and the rafts and floating wigwams working up and down the river a hundred fifty years ago…

But all of it was built on sinking sands of opportunism and exploitation, money made from sugar, white gold,  “valuable pound for pound almost with silver ore, as if nature held a balance and kept a book and offered a recompense for the torn limbs and outraged hearts even if man did not…” (Absalom, Absalom!, 202).

But those oaks with their limbs drooping and needing steel support beams otherwise they sink into the ground so the mulch and grass grow right over them so they look like thick gnarled oakspawny vines that emerge from the ground growing older and bigger, approaching middle age in their three hundredth year.

Today the river is bridged by long steel trusses and there are only long barges and the river is largely devoid of man. The catfish swim and the hawks circle and the greenery is expansive and in Louisiana, wet.