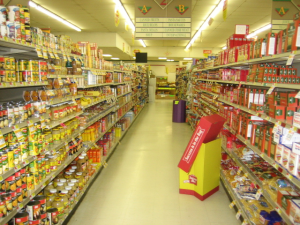 This story is untitled. I wrote it in imitation of Ernest Hemingway’s “Cat in the Rain,” from In Our Time. It’s pretty postmodern of me to introduce this in such a way, so you can forget it or remember it as you will.

Ted and Leo were at the grocery store. They walked under the high lights and the black sky in the parking lot and into the bright fluorescent grocery store. On the right side were the fruits and vegetables and the lit chilled aisles with cheese and packaged meats. They walked around to the back of the grocery store past the deli counter and past the aisles to the left side of the grocery store. They turned into the cereal aisle.
“I always thought how great would it be if they made Lucky Charms with only the marshmellows,” Ted said.
“That would be gross,” Leo said.
“I used to pick the marshmellows out of the cereal and eat them by the handful. My brother would get mad because the cereal wouldn’t have any more marshmellows.”
“They’re freeze-dried. They need milk to taste good.” Leo walked farther up the aisle. He walked to the front of the store and looked at the clerks and made a left and walked to the beer aisle.
There was a man looking at the beer. He had black skin and short hair and he held out his hand as though he were about to take the red pack of beer.
Leo stood next to him, looking at a blue pack of beer bottles and a green pack of beer cans. He could not decide which one to buy. The man with the black skin looked up at Leo and smiled.
Leo smiled back and looked at the beer. “Cans or bottles,” Leo said.
“You drinking with a lady?”
“No,” Leo said.
“Cans.”
Leo picked up the green pack of cans and said, “Thanks.”
He walked to the front of the store again. He took a left to look for Ted and down each aisle he looked until he saw Ted at the back of the last aisle. He walked to him and Ted turned.
“Medium or spicy?” he asked.
“Medium.”
“Alright.” Ted took the medium salsa and adjusted the bag of chips and they walked to the front of the store to the clerks.
The man with the black skin stood in line in front of them. Leo felt nervous and he was unsure if he should say something to the man.
“What do you think Sean’s doing?”
“I don’t know,” Leo said. The man turned and looked at him. He gathered his groceries at the foot of the counter and said, “Have fun guys.”
“Thanks.” Leo said.
When the man had collected his bags and walked away, while the cashier was checking their chips, Ted asked, “Did you know that guy?”
“No,” Leo said. They gathered their groceries and walked down the aisle to the doors and out into the night.

One thought on “I Love Ernest Hemingway”