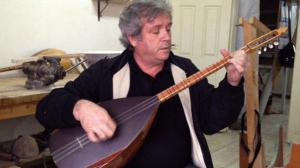 Anthony had read about guys like that in the guide book, the “Friendly Stranger.” They ask you where you’re from, real friendly, and lead you into a cafe, which is really a smoke den, with old men drinking tea and playing cards. He tells you about some gypsies he knows who could show you a good time, roll up a hash joint, take pictures, they don’t care, and then he leads you outside to them, in a real slummy neighborhood, gets you disoriented and takes all your money.

So that was why Anthony was eager to get out, away from that guy. But he did have an English girlfriend. Holly talked to her. She sounded young, she said. That was odd. And also odd was the fact that when I tried to test the waters, 20 lira I said, he laughed. Shouldn’t he have said maybe 50, if he really wanted to get something out of us? But tea is customary. Right?

As we debated this on a hillside outside a musical-instrument making shop, a small man walked outside of his store and asked Anthony a question. I was all ready to turn back to the hotel and relax on the bed, do some writing, etc., but we were being invited into this Turkish lute workshop.

This man was really small, like Anthony is 6’1 and the little guy was standing on a step at least a foot taller than him and Anthony was still taller than him. Inside were people, a woman smashing on an acoustic guitar, a couple of kids, another woman with Down’s syndrome, a couple of men. The little guy didn’t speak great English but damn he was friendly, told the boy to bring out some teas for us. Then a handsome older man came out from the back. He had gray hair side-parted and balanced features and wore a polo and khakis. He wondered why we had come here, and we didn’t know. So he snapped at the boy, who brought out a stool and his saz and he began to warm up. He sat, this bulky man of middle-height, on a small stool so that we could see the outline of his balls through his pants, which Holly and Anthony later commented on. And he sang in his sultry baritone a song about warring medieval Osman factions.

When he finished, the woman who had been playing guitar came out from the back and he told us that she, “his colleague,” had perfected playing thesaz. She sat getting warm and it was clear that the student had surpassed the teacher. She was mean on thatsaz. It was so great to see her play, not simply because she was good, but because she took pride in her skill and lost herself in her excellence. When someone masters a craft, whether it is conducting a symphony, drawing up blueprints or writing blog posts, it is always a joy to see them in their element, living beyond what they are doing in the present, and using their skill to celebrate the immortality of Man.

Of course, such skill is attractive, and even though this woman was well into her 30s, and not exactly my type, she was sexy, and desirable. As I mused on this, mouth open, the man walked forward and removed a stray lock that had fallen over her forehead. The lock fell almost immediately back over her forehead, but it did not matter. The action wasn’t to make it easier for her to play–nothing could have done that–but was rather a claim on that lock, to show that it belonged to him.

And when she sang her voice was of cinnamon and roses–a husky voice of the East. Her song was about the mystical nature of life and death, how we are all reborn if we believe, the man explained to us when she had finished. We knew that it was time to leave, so we stood and shook hands with the craftsmen and the midget and the boys and the woman. The midget told us to come back any time.

We three knew that we had witnessed something special. We vaguely attempted to describe our pleasure in the intimacy of that scene and how friendly the Turks were and how they could very well be national saz stars. And while we speculated on their histories, one thing was for sure–you couldn’t read about that experience in any old guide book.