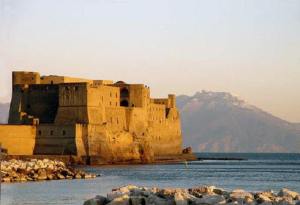 Past the Piazza Plebisicito where all the statues of great men in Neapolitan history stand in their alcoves, down the line from Roger the Norman with his ancient mustache and weird neckbeard, to Charles III with his French coif to Ferdinand I of the Two Sicilies with his Hapsburg jaw; past the building, two hundred years old, a thin coat of grime over its white marble facade; past the piazza where young couples neck to the side of burbling fountains, up Via Toledo and into the Imperial Coffee for a shot of espresso that’s slightly too hot and a biscotti that’s a bit too caramelly and probably gave me cavities but was still good and does it even matter since the Italians invented coffee and they always serve bubbly water with it like an old time soda fountain, after all this it’s easy to see how everything in Italy is so Italian!

But what is Italian? Is it wearing Adidas track suits and saying vafunculo?

Earlier today I went to Egg Castle. It’s a thousand years old, two thousand years old, because it was a basilica before it was Roger I’s fort. It was all open and windy and the wind was wiping sun across the Tyrrhenian sea, the pastel colored villas on the distant shoreline, the water turquoise, everyone knowing the beauty has far outlived them, far outlived even their Roman ancestors because there have been people in this little bay for thousands of years; the Sirens who failed to seduce Odysseus drowned themselves in this bay and here I am seeing it now for the first time.

Italians and Americans have very different conceptions of distance and time. We think that because Italy and Germany are relatively close, they ought to share similar paradigms, customs and habits. They’re European. But the ancient mountain range separating them for thousands of years has led to an exponential amount of difference greater than that between  bon giorno and guten morgen.

Naples has always been controlled by whoever’s been strongest in the region, whoever assumes grand enough power to want this nice little piece of territory with its volcanoes and soft springtimes and rugged storms and sun. To have eras of being conquered and ruled by an ambitious man with aspirations to immortality and plans for art and architecture and newness and greatness in his own image, to be proud of those eras when your region came under the control of such men, when he chose to make your city capital, this is something Americans will never understand.

White people have lived in New York and Oregon for between four hundred (in the former) and a hundred and fifty years (in the latter), not enough time for deep changes to occur. Moreover, the U.S. as we know it (fifty states, even forty-eight) has only existed during the advent of plane travel, greatly reducing distance and compressing it, (unless you’re going by car or train), into a few hours more or less in the sky. And the whole time we’re always Americans, controlled by laws made on the East Coast.

Because we are unconquerable, too new and big and distant to be ruled by any country off our own continent. On one hand this shows our removal from the rest of the world, but like Russia in Peter the Great’s day, in his attempt at Europeanization, it is also a consolidation with and hacking away at the dominance of the old world order and a pushing for a place in the new, all of which occurred during the twentieth century, so that in another hundred years, New York will be a great old city and Washington will look grand and historical, a city of monuments to that great American paradigm of insularity and self-exploration, because there’s always more to be seen and understood about our continent. The U.S. has emerged from its adolescence into its twenties, and it knows what it’s capable of, but is still growing, still learning. There are places in our country where no human has ever stood, or has stood for thousands of years. And before we arrived it was just a bunch of huts. We don’t have pride in native culture the way Italians do in the Romans, because we’re a nation of immigrants.

In Europe there are always eras to be studied, differences between regions to be explored, or even new countries to be lived in and understood. But as soon as you leave home in Europe, you’re an expatriate. Whereas if you move from Texas to California you’re still an American, following in the ways of your ancestors who came from the old country for a better life. Perhaps that’s what it is, the possibility for a better life is always out there, always tangible and barely out of reach. In Europe if you want to try looking for it, go ahead. But you’ll have to give up everything first. And that’s a lot to give up.