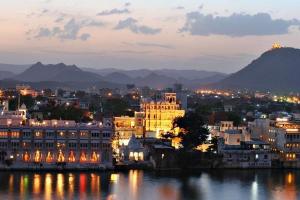 As I sat on the back of the large took-took, Jan sitting in the middle and the driver in the front, the beauty of travel struck me. A white-turbanned old man passed us on his scooter, we rolled past signs that said Eye Doctor and Lasik, and the town was abuzz on Friday night for a Hindu festival. Sure I’ve seen things like this, but each experience in India accumulates into one great metamorphic agglomeration so important and vast to my personality, that at that moment I didn’t want to be anywhere else but on that rickshaw, watching the fumes and dust rise behind us purple and blue in the darkness, the young men and women sitting three or sometimes four to a moped, all confident riding through the desert, happy to be alive on Friday, here in Rajasthan, land of kings.

Everything about this kind of travel, being in transit, is important to making one physically and mentally stronger. It started when our took-took picked us up at 745 from the hotel, and I had to place my bag on my lap with Jan sitting next to me, and move my head left and right to see the road. As we drove up the rocky dust hill the took-took sputtered and died. The driver started the car again and it died. I thought maybe we’d miss the 8 ‘o’ clock bus and that we’d have to take a private cab to Pushkar for 400 rupees. But he rolled down backwards after negating my offer to get out, and started it again, and let it roar up the hill, down across the bridge, past the old temples and onward to the bus, which wasn’t ready to leave quite yet. We waited almost half an hour on the bus, getting hotter and hotter. I was reading Freedom and when we finally started driving and I’d look up from reading about St. Paul and White Plains in Franzen’s conversational tone, I’d see rich red and green saris in front of me and think woah, I’m actually in India, on this really hot, overcrowded bus driving through dark hills. It’s so different from Franzen’s world, from the America I used to know, where people describe those they don’t like or understand in vagaries like “crazy,” or “weird.” Instead I’m in a place where those words can’t even begin to capture a fractal of my experience, where if I were to call the bus ride weird or crazy it would only devolve into a vast American cliche of indifference.

I leaned forward to let the breeze blowing through the partially open window dry the back of my shirt and it was so cold and refreshing, that I said forget it, this is like sitting in water that’s too cold, I’d rather get out and deal with a hot sun. Because after a few days of constantly sweating, when you’re not sweating you’re drying and that state of physical order is unnatural here; it’s against the entropy that’s endemic to India.

When we arrived at our bus, a true sleeper bus, Jan and I had the last double sleeper to share. I didn’t go to Manali or Leh because I couldn’t deal with the chance of a back of the bus seat for 20 hours or however long it takes, the bouncing and jolting and jostling and thousand foot drops into crevasses only to wind up as a local or regional headline American Dies in Noth Indian Bus Drop. I climbed up the metal ladder and lay on the torn upholstery, settled my head on the bump of the pillow and thanked god I wasn’t six foot three because I wouldn’t be able to sleep here, or sit comfortably in these seats or pass through Asia relatively inconspicuously. When the bus started moving, so did my brain in my skull. I told Jan I couldn’t deal. I sat up and we hit a big bump and I levitated three inches for a couple of seconds and that sealed it. Even when I climbed down and sat in a seat near the front of the bus, I still felt rattled. Finally though, I fell asleep, into an uncomfortable state where my leg hurt from not moving and when they stopped the bus for a rest I woke and stretched but didn’t get off, preferring to submit to the pain in my eyes and fall back asleep.

We arrived and it was still dark, maybe five I thought, and the call for Udaipur in a strong accent, but this couldn’t be it– we were supposed to arrive at six, and that would mean the dull gray light of another day, but this— maybe it was just a suburban stop. “Are we here?” “I think so,” Jan said, and after asking he returned and said, “We’re going to the main bus station.” The bus kept going, strong yellow lights on in the aisle, and we drove another k or so before we arrived. Jan told me it was four. His face was greasy and he looked bad. I imagined I must look even worse. He shook his head and looked at the floor. “Four in the morning. What a fucked up time to arrive.” I agreed.

All the guest houses were closed till six but our took-took driver took us to one that would open. After a few buzzes on the doorbell the proprietor came down sleepy-eyed and beetle-browed and fumbled with the locked black gate. He led us into a room with a double bed covered in a white sheet with a dusty brown smudge. “We’ll take it,” I said. After washing my face I lay in bed sweating, somehow excited, thinking about writing and this Udaipur adventure. I heard the call to prayer slow and easy, appropriate to the first of the day, the muezzin’s final notes high with passion and a finality that announced itself. It must be close to five now, I thought, remembering how the call would wake me like a lullaby in Izmir. I should fall asleep.

Yes, Udaipur is very romantic, as good as I was expecting, big man-made lake, rolling green hills in the distance, not as dusty as Pushkar nor quite as hot, and more culture here– the Mewars fought off the Mughals and wouldn’t intermarry with them, so this area retains a very specific identity and pride unique to southern Rajasthan. It’s also more exotic in its austral latitude; you definitely feel far away from the Gangetic Plain, so if you keep going, you’ll soon arrive in the tropics. All this is very satisfying after having been content to stay in one place for so long and to avoid “sight-seeing”: it reminds me that within India were little kingdoms and it made me wonder how Europe managed to separate itself into so many different countries while India became a subcontinental  sovereignty. “The British,” Jan said, and he’s probably right. So I’ll stay another night in this town where they filmed “Octopussy,” get a full night of uninterrupted non-bus sleep before heading East for more adventure, night buses, temples, and additional Indian and overall travel experience, a deeper agglomeration of non-standard, refreshingly new and vibrant content to add and crystallize into my character, knowledge and Self.