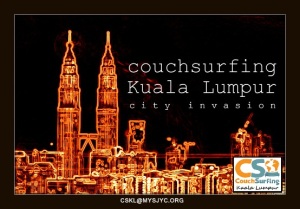 I’m coming to terms with the end of my trip. I met a young man named Aaron last night at a Couchsurfing event a six-foot two German girl invited me to. It was the kind of thing I used to waffle over attending when I lived in New York: should I get on the subway and potentially meet some new interesting people? It’s such a hassle. Is it worth it? I’d much rather stay at home and read and write. Wouldn’t I? That’s my comfortable routine. But life starts outside of what’s comfortable. Doesn’t it? And it would go on like this until someone influenced me to get on the subway and meet her at 23rd and 7th Avenue at a gala event, or my loose connection with that friend from out of town dissuaded me from going to that 2nd avenue bar and I’d feel slightly guilty, maybe like I was missing out, and instead sit at the cafe and burn off the remaining guilt with a caffeine high and internal intellectual discourse. Which I’m doing now, minus the guilt, after having another delicious meal in Chinatown with Aaron, Alicia, and the old dude they’re Couchsurfing with, Eric.

It was in a food court style eatery, with many seats and tables placed in an open-fronted courtyard with food stalls all around. I had a fresh watermelon juice, plate of Malaysian chicken noodles, and a dumpling soup with green vegetables and hearty flavorful broth. Aaron is a broad-shouldered Australian of Filipino descent and has just started his world trip– he left Sydney last Friday. Last night we sat in a corner of an expensive Irish patio bar and he asked me a poignant question: Do people treat me differently after my having traveled? I paused and rubbed my chin before answering that I think so, although I hope it’s not because I come off as cocky or arrogant by place-name-dropping and seeming like I’ve seen so much and they’ve seen so little. I hope it’s not like that, especially when I get home. But they do, sometimes they seem impressed, or maybe they look into my eyes and see no smiling when I talk about it, just the reflection of five months of unrepeatable experience and adventure and life lessons, or maybe it’s just me projecting what I want them to see.

I couldn’t tell if the wet behind Aaron’s ears is sweat or his being new to backpacking around the world. He was wearing the same jeans and long rolled-up sleeved Hawaiian shirt when I met him this afternoon at the cafe we discovered last night. The Warehouse is an art cafe at the West End of Chinatown, with open mics every Wednesday and a with-it expat scene. We found it after the Couchsurfing party had moved from the Irish bar in Bukit Bintang to an expensive nightclub with too-loud music down the street. The whole area was full of white people and rich tourists looking to get comfortable with the familiarities of Western partying– expensive drinks, pop music, and the hope of a late-night pickup. After The Warehouse closed we walked around the neighborhood.  Aaron took pictures on his analog Canon of feral cats and a Hindu hut emanating sari music and flashing me back to Rajasthan and Dharamshala. We circled through the real Kuala Lumpur, past the blue fluorescence of KK Marts and late night-eateries with Asian men looking up at us as they sipped soup or ripped meat from kebabs. It was past two and the cut on my foot still hasn’t healed making prolonged walking painful, so we called it quits and agreed to meet in the morning.

When I got home the six foot two German girl had her head in her hands, sitting on the bathroom floor. I had stopped trying to get on her when I learned she’d been traveling Australia with her boyfriend for the past eight months. But apparently she and some dude had been making out as we were leaving the pub; I had thought they were talking. Later I told Aaron and he laughed and said they were whispering into each other’s mouths.

When I finally did meet Aaron at The Warehouse it wasn’t for breakfast. I woke up at noon after sleeping on a real mattress for the first time in more than a week, instead of the thin pads through which you can feel the wooden bedplanks, so common in the guest houses of Sri Lanka. Since I’m leaving for Singapore tomorrow, I had to get my ticket at the station up the road, which seemed dodgy. A little man led me upstairs to south-bound bus ticket counters, and I felt like I was getting ripped off when I wound up saving only three dollars by not booking with my hostel and going direct to Singapore, instead taking a local bus from JB, or Johor Bahru, which is supposed to be cheaper and more interesting, although slightly less convenient. But Morgan said it’s worth it to see the differences the river makes. Then we walked back from where we came to meet Alicia, a Spaniard with stomach trouble who was also at the event last night. We went to Rice and Chicken Restaurant, where I had green veggies, BBQ pork, and chicken rice.

Alicia had to mail some postcards so we went to the national post office, which had not a trace of bureaucracy, only the glimmering white floors of a bank. From there we walked to the orchid garden, across highways, through pagodas and into a forest of fan-shaped leaves and palm fronds, home to the largest covered bird park in the world. There were orchids of all colors, except blue, because blue flowers are rare. The hibiscus had white veil-like petals. I told Aaron and Alicia my first word was ‘flower.’

On our way out of the park we stopped in the National Mosque. We had to put on violet Harry Potter robes and take off our shoes to get in. Aaron said it’s how he imagines heaven will be: white tile everywhere, blue-tiled pools (full of naked girls in his heaven) and accents of gold and black at the base of all the columns. A nice man offered us literature about Mohammed and told us that the Koran has the answers to everything– how life begins in utero, descriptions of quantum physics and the universe’s expandsion, solutions to why the dinosaurs became extinct– all 1400 years before anyone else had an idea. That’s Islam.

As we crunched down the hill on football-sized brown leaves to the Police Museum near the exit, I waxed philosophical on unwavering faith. It can easily lead to a cultish agreement with every aspects of a belief. Which is how extremism begins, Alicia added. And which undermines, what I think to be, the original author’s meaning. But he was nice. He took us into his office and gave us coffee-stained cups to pour bottled water into. National Mosque used to be the biggest in SE Asia. Before the one in Jakarta was built. That one holds 200,000.

By the time we made it across the river, which I would have crossed via the pipeline if I had had sneakers and a fully healed foot, it was seven, time to meet Eric. I only had to take five steps out to feel the vertiginous thirty feet beneath me and to think about the depth of the muddy brown current. That was before I realized the bridge just yonder. We met Eric at the Central Station after Alicia saw a dude riffling through what looked like the contents of a wallet and finagled the contents away from him and wondered who to give them to so the poor guy could go on with his life. He had a picture of a pretty woman, and was evidently from Bangladesh, so it seemed he was well off enough to figure out to cancel his credit card and get a new one. Finally she ripped them up and threw them away. Then we walked back into Chinatown and ate at the food court.

I figured I’d never see old Eric and Alicia again, but Aaron’s coming to the U.S. for 3-6 months (which is one of the main reasons why I like him– his willingness and desire to visit the most powerful country in the world; despite what the haters think it’s still not China and won’t be until 2018, according to the Economist) means I’ll probably see him in New York.

And so even though it was seven dollars for a beer at that Irish bar, and I know I should be careful with my money to see as much as possible on the rest of my trip, there’s the other part of me that says, fuck it dude, it was worth it to go out and have some good conversation with interesting people. This is the end of your trip and you may as well milk it for all it’s worth– who cares if you can’t go to Indonesia or Vietnam this time around, you can never see it all. Do all you can with what you have. It’s better at this stage to go out and live rather than sit in your hostel room alone reading.

It’s a non-issue. I don’t waffle anymore. When the voice of routine speaks up I let it be heard, but it’s a Miss Havisham whisper. The rest of Daniel Adler knows what to do. How? Many reasons. But the only one I’ll mention now is my having only so many more weeks to live (the traveling life), and every minute counts.