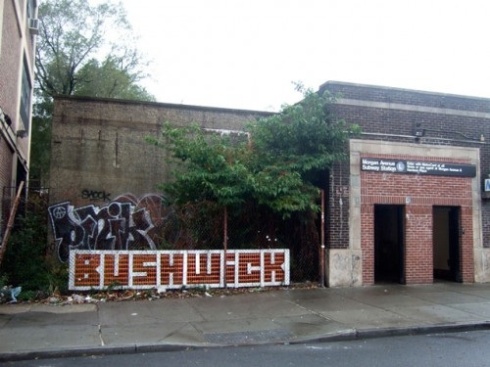 When was the last time you went to Williamsburg and had the time of your life? Better yet, when was your last adventure in Williamsburg?

For me it was a while ago. Part of that has to do with the high-priced condos and the papoose-slinging parents who fill them. This is nothing new– gentrification did the same a hundred years ago to Paris when the bohemians left Montmartre for Montparnasse. But I’m not going to define the causes of Brooklyn gentrification or further ridicule the hipster movement– what I’m asking for is a call to arms.

First, an example of what I am repudiating. A few months ago I met a couple of friends in front of Public Assembly. We walked around the block to a tequila bar where we ordered a beer and a shot of house tequila for fifteen bucks. Then we stood in the middle of the crowded restaurant as waiters bumped around us, serving us dirty looks. Rather than get another round here, we returned to Bushwick.

I’ve brought up this example for two reasons. Firstly, the Williamsburg of yore has changed so dramatically that it is no longer pleasant for me. The same can be said, certainly, by those who lived in Williamsburg during the ’90s and watched it become Condoburg, five years ago. But there’s more to my example– my second reason for bringing it up is that this lifestyle is not sustainable.

Many people I know are burdened with student debt; they take unemployment checks from the government; or they live the #cubelife. When they go out on Friday night and pay fifteen dollars for a shot and a beer to feel uncomfortable in a fancy restaurant, they are not living well. I’d like to point it out because so many people will likely disagree or argue that they don’t participate, when in reality, they do– they may not go to these bars or restaurants, but they participate in the Williamsburg paradigm.

This paradigm takes advantage of your stresses to make you feel inferior, like you have to keep up by going to bars where other inferior-feeling people are being scammed into spending hard-earned money on overpriced booze only to wake up hungover tomorrow to start the cycle again. This paradigm ignores our current state of national decline; our current decadence of living hand to mouth– often beyond our means; the creation of “art” for art’s sake; and morality as it contributes to happiness. In short, the Williamsburg paradigm is a way of mainstream thinking perpetuated by media and big money.

When you’re around people who are of this mindset (which I am too, sometimes) it’s easy to move to their level of egotism and self-righteousness. Williamsburg is the epitome of this mindset, right now, based on how much it has changed over the past ten years in preparation for large conglomerates to move in (for a deeper exploration of how this neighborhood used to be before rezoning, go see “Gut Renovation”).

So instead of contributing to that mentality, I’m staying in Bushwick. We have more time until commercial space is rezoned and usurped by residential developers. There’s also more distance between Bushwick and Manhattan, the birthplace of this paradigm.

This is a call to stop riding the train to drink at bars that are supposed to be fun, to stop working for the weekend, to stop bringing the Manhattan attitude of “my skyscraper is taller than yours” to North Brooklyn. It starts by exploring your local Bushwick businesses instead of going to Williamsburg. Sure there are plenty of great independent businesses in Williamsburg. But if you live in Bushwick and you want to go out to brunch or get a drink, why not walk to one of the plentiful new businesses in the neighborhood? Here there is the reputation, the well-reviewed restaurants, great cocktails, hot cafes. Why leave?

On top of it all there’s the old Brooklyn culture. The locals yelling out their windows, the nibbled chicken bones on the sidewalk, competing bachatas on Knickerbocker Avenue. These are examples of what keeps our neighborhood interesting, what makes it an adventure to go out on the town in Bushwick. Go to Williamsburg with your parents. But when you meet your friends, keep it in the hood. Because when you come here in twenty years with your kids, who live in Flatbush or Crown Heights or East New York, or wherever bohemia has moved to by then, and you wax nostalgic about how Bushwick used to be, they won’t believe you. So enjoy it now, while it’s still up and coming. And please, don’t go to Williamsburg unless you have to.

One thought on “Why Bushwick is Beating Williamsburg”